In the landscape, diseases can wreck havoc on ornamental plants on occasion. Plant diseases are most commonly associated with cultural disorders, fungal pathogens, bacterial organisms, or plant viruses. Cultural disorders are the result of a variety of conditions such as nutrient deficiencies, poor soil drainage, under- or over fertilization, and improper light exposure. In certain situations, these conditions lead to visible symptoms on the leaves such as chlorosis (yellowing), yellowed or browned leaf edges, yellowing between the veins, or in irregular or mosaic patterns on the leaves. Fungal diseases occur when plant pathogens attack various parts of garden plants. In the landscape, foliar diseases are the most prevalent, but other parts of the plant can become infected. There are a variety of different signs and symptoms which indicate the presence of plant diseases. With some pathogens, the leaves show symptoms of plant diseases and form pale patches, round or irregular-shaped spots or blotches of various colorations, or water-soaked/greasy looking spots across their surfaces or along the leaf margins. Other foliar diseases are visible on the leaf surfaces and appear as powdery or brown to rust colored patches. A number of common fungal diseases and control strategies are discussed below. Bacterial diseases often resemble fungal diseases depending on the plant part infected. Bacterial infections usually cause leaves and other plant tissues to have a water-soaked appearance accompanied with a rotten odor. Foliar infections are usually bounded between the leaf veins, and often have angular shapes with straight sides associated with them. Other symptoms of bacterial infections include wilted foliage accompanied by brown and yellow leaves, and dieback of plant parts. Once garden plants have bacterial diseases, they cannot be cured; infected plants should be removed from the garden and discarded. Plant viruses are caused by very tiny sub-cellular particles composed of small pieces of DNA or RNA that can only be seen using an electron microscope. Virus particles basically take over plant cells causing them to function improperly and replicate more viruses. Visible symptoms vary with the virus and commonly include abnormal dark green and light green mosaic and mottling of leaves, ring patterns on foliage, necrotic spots, bumps on plant foliage, distortion, stunting, and abnormal formation and discoloration of flowers. Viruses can be spread to non-infected plants by numerous means including: insects, mites, pollen, seed, and vegetative propagation. There are currently no effective methods of controlling viruses; it is recommended to dig up and remove any plants showing symptoms from the garden to prevent the viruses from spreading to uninfected plants nearby.

Botrytis (Botrytis cinerea) is a disease that attacks the flowers and leaves of garden plants. The common name gray mold refers to the fuzzy gray or brown spore masses that develop on infected plant parts. Botrytis requires dead or damaged plant parts in order for the disease to prosper. Once it begins to grow on wounded or senescent tissues, it can rapidly spread to healthy leaves and stems. The damaged tissue first appears as tan to brown water-soaked areas that become gray as they dry out. Infected flowers usually show small water-soaked areas, which enlarge rapidly and turn to a brown or black coloration.

Botrytis is particularly problematic during cool, wet weather when the plant is wet and the humidity is high. However, gray mold can rapidly establish under a wide range of temperatures (55 to 84º F). The main factor for disease development is free water on plants for several hours. These conditions are often created from watering late in the day, allowing the plant to remain wet into the night or irrigating during cool, cloudy conditions. Condensation or dew on plants may also lead to botrytis.

The occurrence of Botrytis on garden plants can be greatly reduced by preventing free water from staying on plant surfaces for extended periods of time. Where possible, minimize overhead irrigation late in the day and during cloudy weather. Gardens in the open with lots of air movement will generally have fewer problems with Botrytis then gardens that are in somewhat protected areas. Plants in the landscape should not be overcrowded and have an adequate amount of space between each plant. Removing dead plant materials, such as senescent leaves and flowers, from gardens can greatly reduce the incidence of Botrytis infestations once optimum conditions arise.

It is generally not necessary to control Botrytis in the landscape, but under certain circumstances it may be beneficial to apply fungicides to keep this disease from spreading. Botrytis can be controlled using natural products containing neem oil (Try our Garden Safe Fungicide 3), or with chemical fungicides containing chlorothalonil. 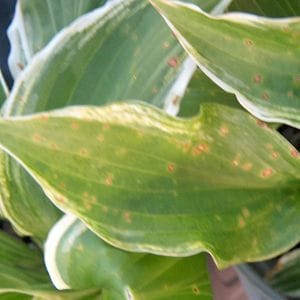 The term ‘leaf spot’ is a very ambiguous description of many plant fungi, bacteria, nematodes, or viruses that often attack plants in the landscape. There are nearly 1000 fungal pathogens that cause leaf spots on garden plants. Some of the common leaf spot causing fungi are Alternaria, Ascochyta, Cercospora, Colletotrichum, Fusarium, Phyllosticta, and Septoria.

Fungal leaf spots vary from the size of a pinpoint to lesions that practically encompass the entire leaf. Many leaf spots are tan to dark brown in color and may be circular, angular, or irregular in shape. At first, leaf spots usually appear as small necrotic areas of various colors (tan, dark brown, yellow, gray, purple, or black). Some spots may appear shiny or raised. As the disease spreads, the spots often merge together, forming large angular or irregular dead spots. Most leaf spots are not detrimental to garden plants, but they can severely affect the appearance of infected plants in the landscape.

It is difficult to properly identify the pathogen causing leaf spots. If you experience persistent problems (year after year) with the same type of leaf spot, it may be beneficial to contact your extension agent and/or submit samples to a diagnostic clinic for diagnosis. Once the pathogen has been identified, you can determine if control strategies are necessary.

Most leaf spot diseases require cool conditions, wet foliage, high humidity, and little air movement. These conditions occur regularly in mature landscapes and gardens where the plants have grown together and air movement is somewhat inhibited.

The occurrence of leaf spots can be minimized by keeping the foliage as dry as possible and providing irrigation early in the day to allow the foliage to dry quickly and not stay wet during the night. Plants in the landscape should not be overcrowded and have an adequate amount of space between each plant. 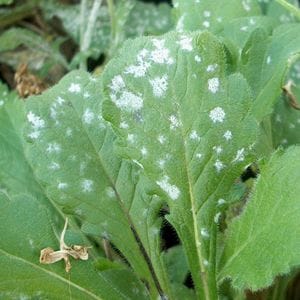 There are numerous annuals, perennials, and woody ornamentals that are susceptible to powdery mildew infestations. Powdery mildew appears as small whitish-grey, talcum-like patches (¼ to ½ inch across), often referred to as colonies, usually on the upper leaf surfaces. Powdery mildew greatly reduces the aesthetic appeal of plants in the landscape, but also impacts plant vigor and flowering.

Powdery mildew diseases are caused by several different fungi and are usually host specific; meaning the powdery mildew that infects garden phlox is different from the mildew that attacks lilac. However, mildew diseases will attack plants within the same plant family. For Example, cultivars of Aster and Solidago belonging to the Asteraceae family are commonly infected by powdery mildew from the genus Erysiphe. The primary mildew genera commonly found on ornamentals are Erysiphe, Leveillula, Microsphaera, Podosphaera and Spaerotheca; these genera each consist of several species.

Most powdery mildews are observed as white powdery colonies on the upper leaf surfaces. Occasionally, it can be observed on the undersides of leaves, usually directly below a small yellow spot on the upper surface. Severe infestations do not remain as colonies, but tend to cover the entire surfaces of leaves, stems, and flowers.

The presence of powdery mildew is greatly reduced when high humidity levels or dramatic swings in humidity are avoided. In many cases, mildews occur when condensation forms on the plant leaves at night. Keeping the leaves dry throughout the night will prevent mildew spores from germinating. In the landscape, maintaining sufficient plant spacing increases the air circulation and reduces the humidity levels near the plant canopy where infections occur.

With the host specific nature of powdery mildews and several different species of mildews attacking ornamentals, there is not a single fungicide that works equally well on all mildew species. One fungicide may provide excellent control on one mildew species, but provide little, if any, control on another. Although the powdery colonies look similar between species, they each have different fungicide sensitivities. 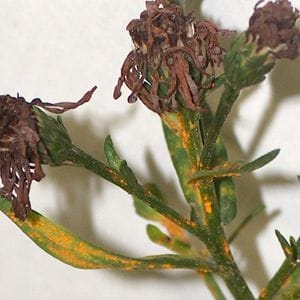 Rusts are another group of fungal diseases that commonly attack garden plants. Rust diseases appear as small swellings called pustules, most commonly observed on the undersides of leaves. There are numerous genera of fungi fungal pathogens including Aecidium, Endophyllum, Coleosporium, Puccinia, Pucciniastrum, and Uromyces that cause rust diseases; these genera each consist of several species.

Similar to powdery mildew, rusts are obligate pathogens and usually require a specific host plant or family of plants, such as those in the Asteraceae family. Many rusts have complex life cycles and require two different plant species to use as host plants during various stages of their life cycle.

Most rust diseases can be first identified by the appearance of pale green or yellow spots on the upper leaf surface. These spots usually develop necrotic or dead areas in their centers. Powdery pustules develop on the undersides of the leaves producing raised blister-like areas containing white, yellow, orange, black, or brown spores. The spores are spread primarily by air currents from the wind, but can also be spread from leaf to leaf or plant to plant with splashing water.

Depending on the rust disease, it usually requires the leaves to remain wet for 3 to 6 hours and temperatures between 50 to 75º F for infections to occur. Avoid irrigating crops in the evenings or at night; instead water ornamentals susceptible to rust diseases in the morning, allowing the foliage to dry before night. If possible when irrigating, avoid getting the foliage wet or splashing water from leaf to leaf. Allow adequate space between the plants to increase the air circulation and to encourage quicker drying of the leaves following irrigation.

Achieving complete coverage is important, and multiple applications are often necessary when using natural or chemical control products. These products are most effective when applied preventively or following early detection of rust diseases; none of these control strategies will eradicate rust from infected plants.